Next up in our interview series with Darkhaven guild leaders is Allon Barcalliyon and Reine Tovar of [HoTR]. [HoTR] is a growing guild with a smaller, but dedicated group of WvW pros who seem to always be in-game. They’re a welcome sight in any borderland as well as our Facebook groups and website forums – but it’s on Teamspeak that you can really tell that the players of [HoTR] are all about fun. 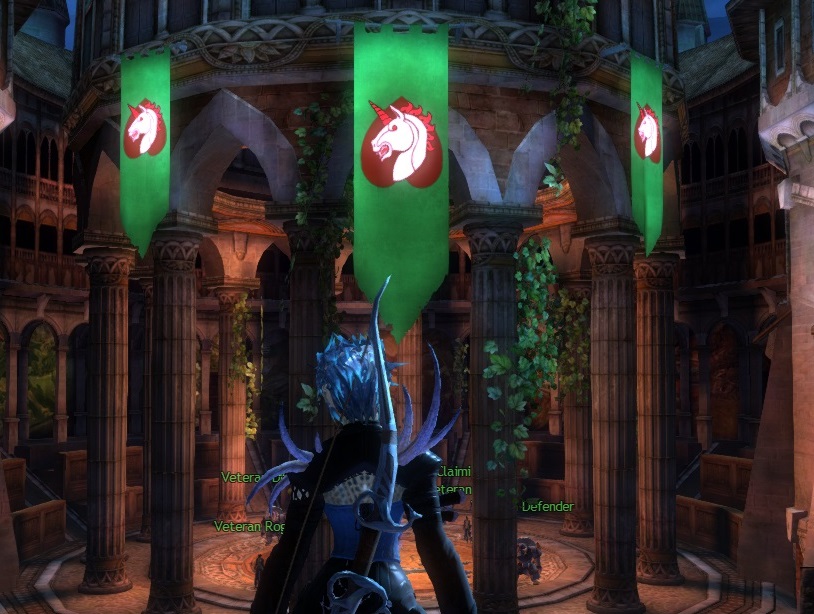 Provide some insight for players who may be wanting to start a guild and tell us how HoTR came to be?

One of the keys for starting a guild is first having a strong core of people. As a community, we have a few people that have been gaming together since 2007. In HoTR, its not just one person that makes the decision of how we evolve; The people that make up the heart and soul of the guild keep our best interests in mind, and decide the direction we want to go, to grow as a community.

Second, it is very important to have a set difference from other guilds and fill a gap in the GW community that people want and need. It really depends on what kind of guild you and the people in your core group want to be. We’ve all seen that there are a variety of guilds out there, each with their own unique sense of direction. In fact, HoTR allied with a few other guilds from time to time to see what was out there, but in the end always desired to form its own unique identity.

Third, remember that it is impossible to satisfy every need of each unique individual in your guild, as well as possible recruits. Never take it to heart when they strive to find their own unique direction in a community.

Finally, always remember that being a guild should never be a numbers game. A guild should provide its members with a sense of community and belonging first and foremost. Of course, we at HoTR believe in a healthy dose of banter along with community building.

As for how HoTR came to be – it has been around for quite a while, forming in 2006, I believe, as a Guild Wars 1 guild. It started out as a group of friends and then was handed down to a strong core group of people dedicated to playing the game. It held out in those darker days of less and less content waiting for that promised land of Guild Wars 2 through a great community and a decent alliance to play with. That, and those sweet, sweet achievements.

Once Guild wars 2 came out we would fluctuate with numbers until we ended up with a decent number that were consistent players. A couple times merged with another guild, but it never felt like a truly perfect fit. HoTR decided then it was best to forge its own path, of which we are truly excited to present to you today.

What is the secret to growing a small guild into a bigger one like HoTR?

Mainly it’s just getting out there to find like minded people that will be comfortable within your group. I wouldn’t say we’re large as much as a constant guild. For us it’s more of a social hour or more for hanging out and having a good time with friends. We try and keep a relaxed feel to the guild being fully aware that people have real lives. (I know that was blasphemy to the Guild Wars Gods but we know it’s true.) One of the key differences between HoTR and other decently-sized guilds is the recognition that every member has a voice, and deserves being heard. Often, a single member can get lost in the sea of voices in other large guilds. In HoTR, the exact opposite occurs, we urge you to make yourself known because you’re worth getting to know, as a person. 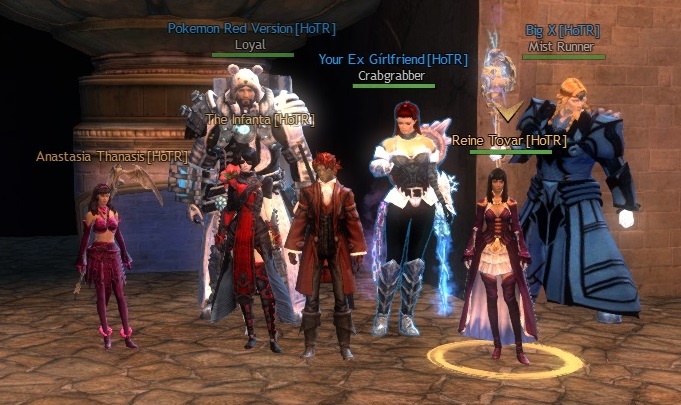 As far as actual combat and gameplay goes, what would you say is your guild’s biggest achievement?

In terms of gameplay, HoTR generally does what the majority of guilds do, PvE wise. We all do the same dungeons, fractals and events as most others. We’ve never kept track of our speed or efficiency in such areas, as we’ve never had to qualify our skills. One of our favorite past times is to divert much of the larger enemy forces, and to take a tower in enemy lands, wasting their time as we bathe in bags. We like to take the target, siege it up, and defend it like its our newly renovated guild hall. I mean, come on, we just measured the floor for new carpeting and scrubbed the blood off the stone work. You don’t want to just hand it back over without a fight.

Once, we took the NW tower to gain some attention, cause who doesn’t love that negative energy rolling over you. After repelling a few small groups easily the enemy decided to ignore us and well, that made us feel bad. Misery loves company so up went the trebuchet. After about 5 volleys to their garrison they decided to hit us from afar and counter treb. Our man Deadeye Dave (ya we’re that geeky) took them out and continued our unwanted advances for love and affection. This went on for over an hour, they would try and take us from afar and we’d kill their siege with a treb or ballista before they were able to use it with much effect. Enemies would get cocky, and over the wall our group would go slaughtering with glee and shouts of extasy. (Yes we have one of “those guys”) Eventually, we were overrun but a couple of us received PMs from the opposing server proving how annoying we had been to them. Now, whether our other groups in WvW at the time had taken advantage of it will never be revealed but we felt good about what we had done.

Another time we had taken one of the south towers and were just hanging out sieging up our new home, when the home server’s zerg showed up. We thought we were dead. However they ran right by us on their way to the other opposing server’s zerg. We had built a treb and a couple other siege and fired shots in the giant red ball of people. The entire time, these two zergs didn’t even acknowledge us. They were more worried about the opposing zerg then our trolling group. We’d send a group of four or so into the fray and take out the slow buffalo that weren’t in the main groups. The loot bags were coming our way and it didn’t seem that either group cared. Like in so many other situations, it came the time when we reenacted the final scene from the Alamo but it was fun none-the-less.

It’s been a big turnaround for our guild, he has made us better players in WvW when we go up against groups of similar size or even larger ones. Infanta is a good teacher and he has taught us alot about our favorite character classes and how to play better.

He’s a good teacher, and apparently we are a good fit for him cause he tries to recruit everyone he can to join in our shenanigans.

A lot of guilds do the same things – leveling, events, missions, etc. But what would you say makes HoTR most different from other guilds?

Self depreciating sarcasm. We make fun of ourselves a lot. If you’ve ever seen our #HoTR comments in WvW you would understand. Not to say we’re not above teasing our fellow members, but we all make sure that we can take a joke before we start making them. That and we have two liberal arts majors….. Not too relevant in gameplay but they definitely make our guild interview and recruitment posts pretty. (Denis appreciates this and is glad his MA in Early Modern literature was not a waste).

Any goals for HoTR in the near or foreseeable future?

We’re trying to be a strong backstab WvW guild. We want to be the ones to hit and run areas to take pressure off the main force. Take towers close to the enemies’ homes and taunt them into fighting us on our terms while the larger forces get things done with less effort and more speed. Our main goal is to get our WvW coordination down, to better serve Darkhaven as a whole.

Where did the pink unicorn emblem come about for a guild banner?

Back in the days of Guild Wars 1 whenever it was Alliance Battle weekend we would break out the pink unicorn on our capes to strike fear in our enemies hearts. And when that failed to happen, which was often, it was simply fun to watch a group of attackers with outrageous capes kill the enemy for fun. People could easily identify our group, allies and enemies alike. As a side note, I really miss the capes in GW2.